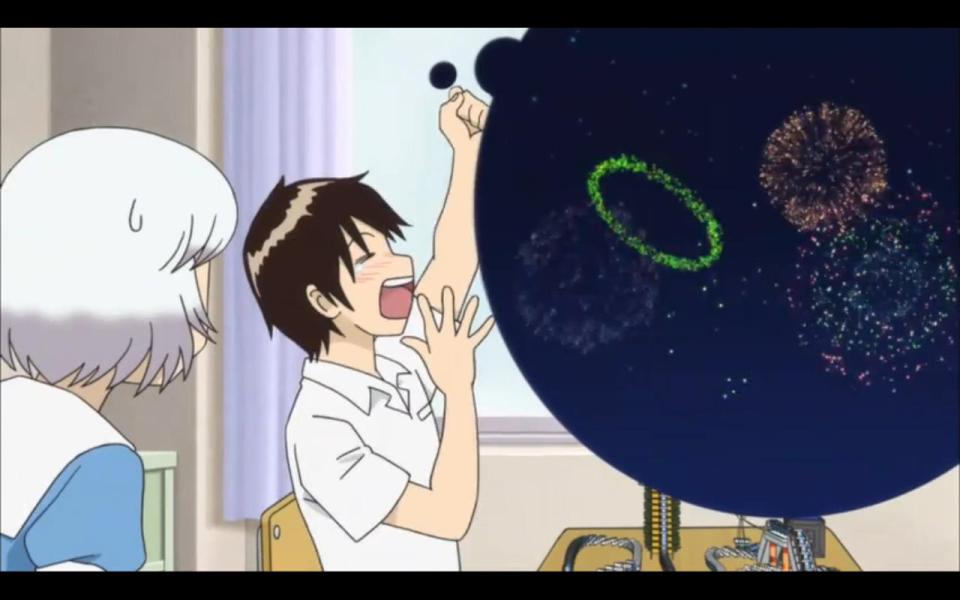 Tonari no Seki-kun: The Master of Killing Time is pretty straight forward. It centers around two characters: Yokoi and Seki-kun, the former being a female student and the latter being the titular male character. As the title suggests, Seki-kun likes to kill time during class. In the case of the first episode, he does this by playing dominos. If you’re wondering how this provides enough material for a full episode, you can stop. This is a short series, with the first episode coming up at seven minutes and some seconds. If you’re wondering whether it’s worth your seven minutes, read on.

As of now, it appears that the series will be narrated by Yokoi as she observes Seki-kun in his various time killing methods. It’s quite amusing to watch her reactions to Seki-kun’s blatant goofing off, and even more amusing that the teacher doesn’t notice at all—but he certainly notices Yokoi! So far, the humor is clean, and in fact so is the whole show. The artwork, on the other hand, isn’t anything spectacular, but it’s easy on the eyes and doesn’t look horrendous, so don’t let that turn you off. If you want to simply be amused by something, then give Tonari no Seki-kun seven minutes of your time.

Okay, it’s really hard to comment on a seven minute short, especially when it is mainly focused on a guy putting together a line of dominos!

I guess I could stretch it and make some kind of argument about how Seki-kun is a bad moral influence because he goofs off in class and distracts another student, yet doesn’t get in trouble himself, but I think I’d be grasping at straws, and it wouldn’t be an honest reaction, either. Seriously, this looks to be a clean, light-hearted series that anyone should be able to enjoy with a clean conscience.