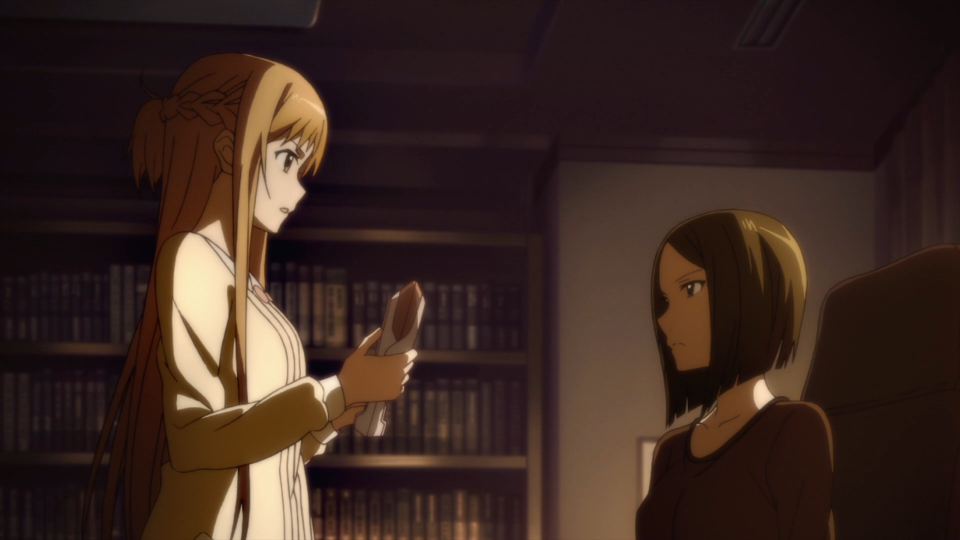 We continue our trip down the path of character development this time around. As you probably surmised from the end of the previous episode, Asuna intends to give Yuuki the experiences she couldn’t otherwise have via Kirito’s project. As such, we get to watch as Yuuki is able to experience school and to visit a place that she never thought she would see again. As a result of their time together, Asuna is finally able to find a way in which to communicate her emotions to her mother, which leads to the first potentially tender moment we have seen between the mother and daughter, along with a scene of young Asuna. The episode wraps up nicely and shows that event the hardest of hearts can be softened.

Overall, it was a very nice episode. There was no action, though, and very little time spent in ALO, so if that is what you were looking for then you will be disappointed. One nice little touch is the subtle reveal that Yuuki’s family was Christian. While visiting a certain place, Yuuki mentions that her mom used to pray, and that her mom used to tell her that God would never give us more than we could handle. Yuuki comments that she didn’t want to hear the Bible’s words, but rather her mother’s words—but now she understands why her mother told her that. Yes, this sounds a little harsh (although lets focus on her present realization, not the negative reaction she had when she was younger), but it is still a nice little inclusion to see this hint that Yuuki comes from a Christian family. It was also nice to see the warm reception that Yuuki received from the rest of the students at the school. The writers could have made some of the students cruel for the sake of conflict, but that would have tarnished the beauty of what was going on, and besides that all of these students probably remember what it was like to be confined to a virtual world for an extended period of time.

At this point, Sword Art Online II only has a couple of episodes left, and the pace of the story is certainly moving towards resolution—Asuna has accomplished the goal for which the Sleeping Knights hired her, and the primary conflict of the arc has been resolved. Now all that’s left is to see how this story line will resolve. If the information presented to us (and the suggestions of people commenting on Crunchyroll) is any indication, then we may be headed for a real tear-jerker. Only time will tell. If you’ve stuck with it thus far, then do stay for the end.

We can learn a lot from Yuuki’s attitude in this episode. Since we are now one episode removed from her big reveal, I don’t see a need to be cryptic: we know Yuuki is dying, and we know that she hasn’t had the greatest life. It would be really easy for Yuuki to break down after finally seeing the outside world again and lament at how unfair it is that she has to die so young and miss out on so much. She could, but she doesn’t. Instead, Yuuki is grateful for everything Asuna does for her, and she appreciates what she has. How many times do we become ungrateful over trivial things? The neighbor has a nicer car, or can afford a better vacation. His kids have a full scholarship, while you’re stuck footing half of your child’s bill. So on and so forth. These things may not be fun (especially that last one), but they will all eventually pass. Yuuki’s situation will not. She knows that she is living on limited time, and that there’s no changing her fate, yet she simply enjoys the opportunities given to her and is thankful for them.

1 Thessalonians 5:18 tells us “give thanks in all circumstances; for this is God’s will for you in Christ Jesus.” Yuuki’s attitude is a perfect example of this. She may be a fictitious character, but the next time we’re feeling ungrateful, let us Yuuki’s situation (along with the relevant Bible verse, of course) and ask ourselves if we really have it all that bad.